In Praise of Garter Stitch

I am not usually a fan of “simple” knitting – sometimes called “idiot knitting” or “TV knitting” (at TNNA, we were taught in a marketing class to call it “meditative knitting” so as not to insult our customers). The most basic form of idiot knitting is, of course, garter stitch – knit all stitches on all rows.

Every new knitter starts with garter stitch, usually on a scarf. Once you become adept at that, you move on to stockinette stitch – knit all right side rows, purl all wrong side rows – and you don’t often go back to garter stitch because it seems, by then, that there is little skill in it.

And yet, this fall, I decided I wanted to knit my son Shawn, 26, a scarf for Christmas. Shawn lives in Boston, where it is cold, and he doesn’t have a car, which would have heater, so he is often out walking in the cold to the T or the bus or to work at Google (yeah, that’s a thinly-veiled brag about my son). But I didn’t feel like putting too much thought or work into the thing because I thought – as many mothers do – oh, he’ll probably lose it.

About the same time, I went with my friend Rachel to Uncommon Threads, a beautiful yarn store in Los Altos. Something attracted me to their display of Lantern Moon needles and I bought a pair, size 7, 12 inches long.

Now, I dislike straight needles and I dislike wooden needles almost as much as I dislike garter stitch. I don’t like the feel of the wood on the wood – too much friction or resistance. And I love the pointy points you can get with a pair of metal needles, best for my favorite type of knitting – lace. And I like my needles to go clicky-click. If needles don’t go clicky-click, what’s the point, I ask you? I do not know what possessed me to buy these needles – which were not cheap – and were both straight and made from wood! But I did. And as I left the shop I felt like I could not wait to try them.

By the time I got home, it was after midnight, but I went straight to my stash for a couple of skeins of Cascade Jewel I had squirreled away for about 5 years! It is sort of a deep, Columbia blue. I sat with this slubby yarn – again something I don’t normally like – with my straight, wooden needles and cast on 40 stitches and began working in garter stitch.

Which just goes to show you why we love this craft called knitting – it has an endless capacity to surprise us, to nurture us and to teach us things about ourselves. For me, I learned not to always believe that what I don’t like is really what I don’t like. And I learned to trust my instincts – I have since purchased one more set of Laurel Hill straight wooden needles, size 4, and am doing a much more difficult lace scarf on them. And I’m digging them, too!

I finished the scarf just after Christmas (Shawn unwrapped a box with the scarf still on the needles) and I kinda miss it. While I am not tempted to do another scarf, I think I might cast on for an Elizabeth Zimmerman Baby Surprise Jacket, all garter. 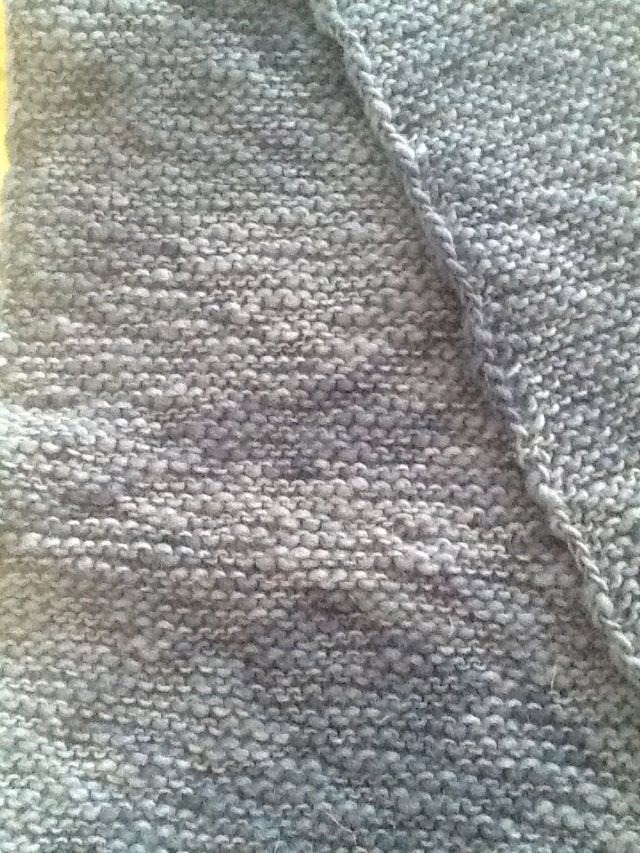 3 Responses to In Praise of Garter Stitch